The southernmost park in the Luangwa Valley and home of the biggest concentration of hippos in the world, South Luangwa National Park is one of the great wildlife sanctuaries.

It is world-renowned for its plentiful game, including four of the Big Five, with herds of elephant and buffalo hundreds strong. First made a game reserve in 1938, it was declared a national park in 1972 and was the first wildlife area to offer walking safaris. Guided game walks still offer visitors a thrilling yet intimate bush experience.

Cookson, Crawshay and Thornicroft channel English suburbia rather than African bush, but all are names for game endemic to the Luangwa Valley. Cookson’s wildebeest is a subspecies of the brindled gnu, Thornicroft’s giraffe occurs only in South Luangwa and Crawshay’s zebra is a subspecies of the near-threatened plains zebra. These and 60 other wildlife species have been protected by the natural barrier of the Luangwa River, one of Zambia’s great rivers. This is a tributary of the Zambezi and a haven for hippo, crocodile and fish. Though South Luangwa’s black rhinos were wiped out by poachers by the late 1980s, elephants have been preserved through the efforts of the park’s rangers.

The park rises from the Luangwa River in the east to the Muchinga Escarpment in the west and northwest. The woodland savannah that covers the park is interspersed with patches of open grassland, where grazing animals are easily seen, and wide floodplains along the river where hippo graze at night.

The different seasons bring their own rewards. In the rainy season, animals are dispersed within the park but the park is a lush green wonderland. In the dry season, the landscape is a sere brown but game in great numbers is easily seen as it congregates near the river and its oxbow lakes and pools. This is one of the few parks to permit night game drives, an excellent time to see the park’s well-known predators, which include lion, leopard and hyena. With more than 400 bird species here, it is possible to fill a birding checklist with more than 100 species in one day – look out for the critically endangered hooded vulture.

Things to do in South Luangwa National Park

Unapologetically luxurious Chinzombo is set within 60 acres of private land along the Luangwa River. Private, direct access into one of the most game-rich areas of the South Luangwa National Park and expert guiding combine to make this a truly special place. Chinzombo enjoys a venerable history as a green-season safari base dating back to the 1970s, however the brand-new lodge – which hugs a generous curve of the Luangwa River in the shade of towering, ancient ebony and mahogany trees on a wildlife-rich ridge – has been architect-designed for maximum luxury and elegance. Just six enviably luxurious tented villas… 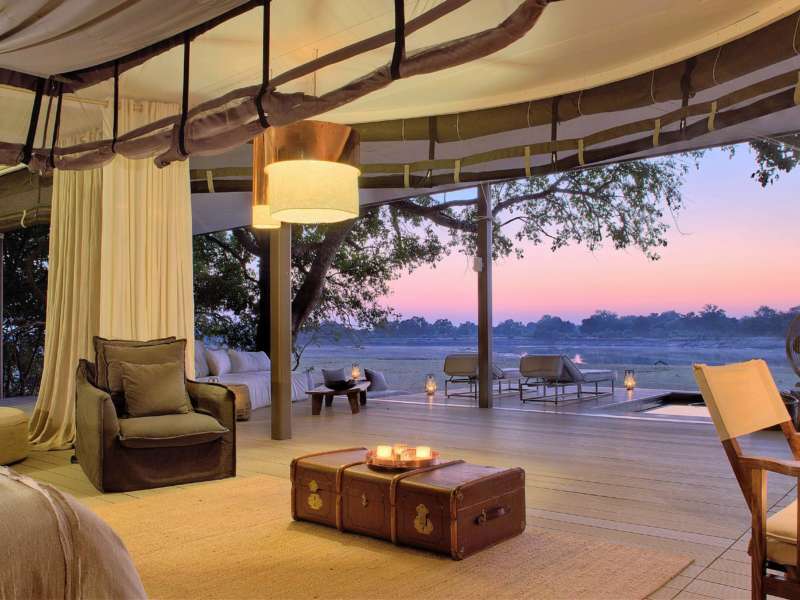