The Central Kalahari Game Reserve is one of the most scenic, remote and unspoiled wilderness areas in Africa.

It is also one of the largest game reserves on Earth, covering an area larger than Switzerland. Never mind off the beaten track, the Central Kalahari is entirely off the grid: no pesky cellphone calls or emails will bother you in this vast expanse. This is authentic wilderness, and travellers must come prepared. Private safari camps or guided mobile safaris are an excellent choice in this unfenced wild paradise – where star performers include the Kalahari black-maned lion and numerous cheetah – although self-drive camping safaris can be undertaken by intrepid (well-prepared and entirely self-sufficient) travellers.

The arid and semi-arid landscape varies from open plains to salt pans to undulating sand dunes covered in bushveld and golden grasses. The area boasts four fossilized rivers, including Deception Valley – named for the shimmering mirages that lure thirsty travellers to an illusory oasis – which dates back some 16 000 years. This is big-sky country: by day the unending dome of sky is mirrored by the flat, wide pans stretching as far as the eye can see; at night, the Milky Way in the southern sky is startlingly clear and immediate. This reserve conveys a sense of vast, wild and timeless beauty. No one departs without a renewed sense of privilege and wonder.

Resident species include giraffe, elephant, white rhino, Cape buffalo, spotted and brown hyena, honey badger, warthog, caracal, Cape wild dog, black-backed jackal, blue wildebeest, zebra, red hartebeest, eland, gemsbok, springbok, baboon, ostrich and the Kalahari black-maned lion as well as leopard and cheetah, plus loads more. After good summer rains (November to March) the flat grasslands of the reserve’s northern reaches teem with wildlife, drawn to the best grazing areas. These include large herds of springbok, gemsbok, wildebeest, hartebeest, eland and giraffe – as well as the predators that follow them, making for exciting Big Cat action. At other times of the year, when the animals are more sparsely distributed, the experience of travelling through truly untouched wilderness of seemingly unending dimensions is the draw.

As well as game drives and guided walking safaris, activities include guided walks with San (Bushman) trackers to explore their culture, learn survival techniques and hunting skills, and be amazed by their extensive knowledge of all plant and animal life. Traditionally nomadic hunters and renowned for their rock art paintings, the San trace their history in southern Africa back tens of thousands of years.

Things to do in Central Kalahari Game Reserve

If you agree with us that true luxury cannot be counted by the thread count of bed linen or the plushness of a carpet but lies in the privilege of exclusive access to vast tracts of Africa’s best wildlife areas, seclusion, privacy and space, you will love Kalahari Plains Camp. This luxurious camp in the remote Central Kalahari Game Reserve offers some of the best summer wildlife-viewing opportunities in Africa. The reserve is the largest conservation area in Botswana and one of the largest in the world. Within this beautiful biome, Kalahari Plains Camp looks out over an immense pan…

The first semi-permanent camp to open inside the Central Kalahari Game Reserve, Tau Pan makes the most of its starkly beautiful, remote and unspoilt surrounds. Situated on the ridge of an ancient sand dune, the camp overlooks the permanent watering hole at the famous Tau Pan, named for the pride of iconic black-maned Kalahari lion that frequent the pan and the camp itself. Days at this haven in the Central Kalahari are filled with game drives in a 4x4 Landcruiser in the company of a guide and tracker team; day trips to well-known Deception Valley or Sunday, Piper and Passarge… 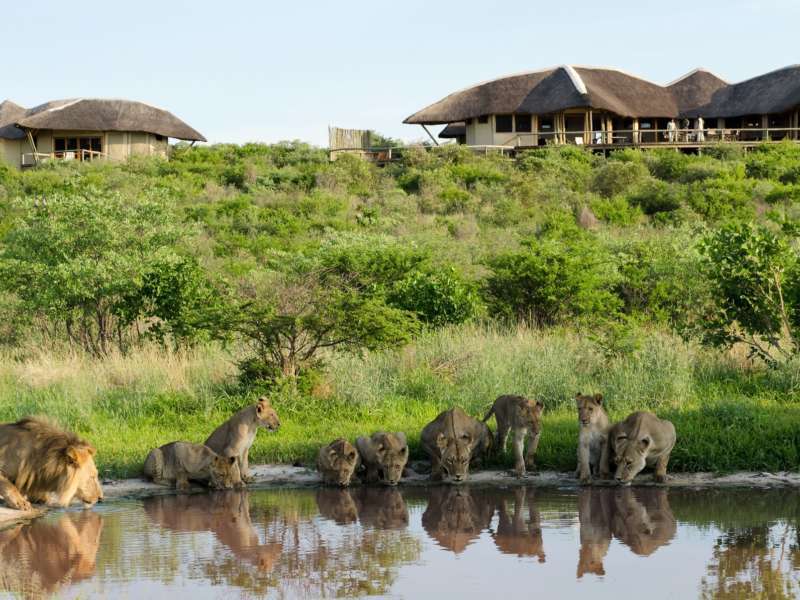